Alma Mater with Scholarship Endowment at the University of Guelph 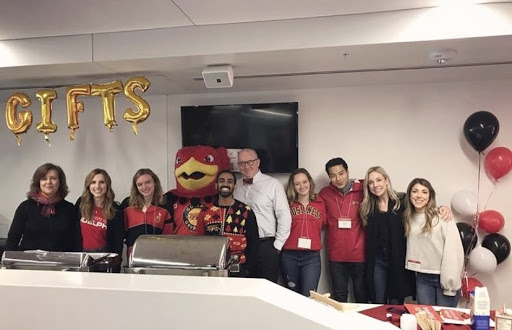 GUELPH, ON – The University of Guelph is pleased to announce today that it has received a generous scholarship endowment from one of its distinguished alumni, Chase Tang, who is a rising star in the world of acting with his recent lead casting in a Netflix original series. The University of Guelph is known for producing numerous graduates who have excelled in the fields of Science, Medicine, and Engineering, as well as the creative arts. As part of his humanitarian endeavors, and also to give back to the place that influenced his life’s journey, Chase Tang has decided to give two scholarship endowments to the University of Guelph, which he has dedicated to the memory of his mother, Shu Wei Chan. These endowments will go a long way in helping many young people get through university and achieve something great in their lives.

As part of his humanitarian endeavors, and also to give back to the place that influenced his life’s journey, Chase Tang has decided to give two scholarship endowments to the University of Guelph, which he has dedicated to the memory of his mother, Shu Wei Chan. These endowments will go a long way in helping many young people get through university and achieve something great in their lives.

As someone who received an entrance scholarship to get into the University of Guelph, Tang realizes the importance of a good institution and education, which not only helps one get a well-paying job, but also guides their life’s journey to a great extent. Tang’s generous contributions for the University of Guelph will ease the burden and lessen the struggle of many young people, so that they don’t have to go through toils and tribulations like he did. 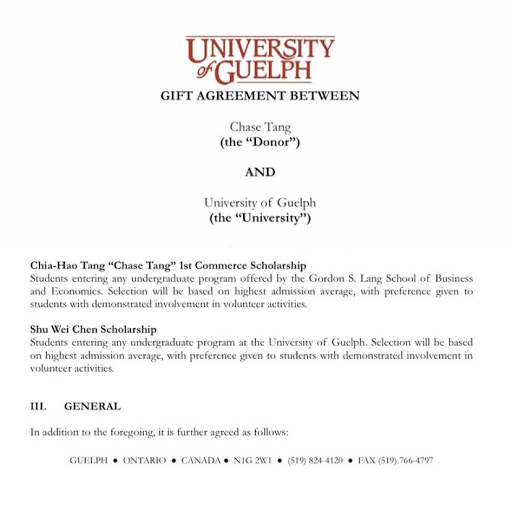 Chase Tang speaks highly of the university and credits it as one of the best decisions of his life. He speaks highly of the professors and mentors that he studied under, and regards them for guiding him in his studies and life journey as well. After graduating, he found a well-paying corporate job, but soon realized that he is meant to achieve his lifelong dream of acting. After leaving his job in 2016, Tang decided to enter the world of modelling and acting, and started taking acting lessons to get the right start into this new industry. The first few years involved a lot of struggle, but Tang isn’t new to this, as he has faced his fair share of struggles in his life. When he was 17, his parents separated, and things took a downward turn financially as well. He kept working low-paying and minimum-wage jobs to support his education and get by. As hardworking as he was, he finally managed to graduate from the University of Guelph and achieve success in the corporate world. Once he left it all behind, he was determined to make it big in Hollywood, and this was followed by three years of intense struggle, learning, and acting in many short films and TV series with uncredited roles. Some of the notable TV series where you can catch a glimpse of Tang are Designated Survivor, Suits, and Slasher. All of these TV shows were acquired by Netflix after running on TV for a few seasons. He has also appeared in the short films, Time, Space and Lee, View, and in the TV documentary series, Scariest Night of My Life. 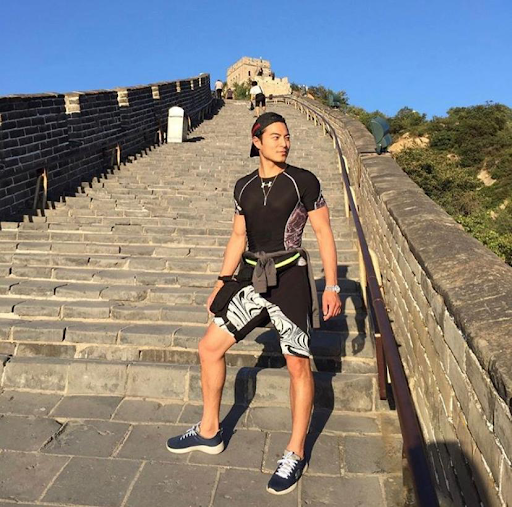 Finally, Chase Tang has gotten his big break, as he is casted in Netflix original series, Jupiter’s Legacy, a superhero TV series that is based around the eponymous superhero comic series by Mark Millar and Frank Quitely. Set to release in 2021, the series will revolve around the descendants of the world’s first superheroes, who struggle to live up to their ancestors’ legacy.

Chase will be seen playing the role of Baryon, a Supervillain of Asian descent whose only task will be to make life difficult for the superheroes. He is over the moon about landing this role, which he considers to be life-changing and one of the biggest opportunities of his life so far. Needless to say, a phenomenal role on a Netflix series will certainly put Chase Tang on the map and propel him towards even bigger projects and roles.

Although the show hasn’t premiered on Netflix as yet, Chase has already begun getting entertainment and endorsement opportunities from everywhere, which means that we will be seeing more of him in different films, TV shows, advertisements, campaigns, and much more. He is delighted to get a landmark role in a major series, as it paves the way for more people of Asian descent to work hard and achieve great success in film and television. He is also listed among the Top 10 rising Asian actors in Hollywood by the Internet Movie Database.

His casting in Jupiter’s Legacy also brought about a campaign by fans of the Marvel Cinematic Universe, who want him to play the role of Namor, a submariner who hasn’t been seen in any of the MCU movies till now. Many social media pages have been created by fans for this very purpose, and he is pleasantly surprised at all of the support he is getting. According to him, he has nothing on his resume to make him eligible for the resounding support. 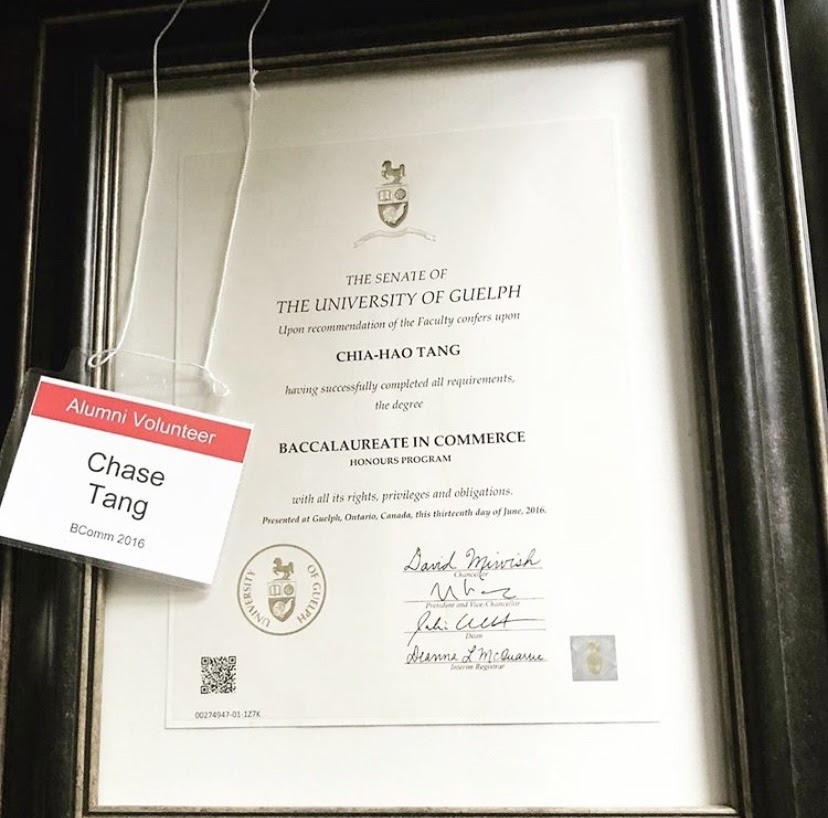 Apart from his acting career, Chase Tang supports many humanitarian causes and actively participates in activism. He is a vocal proponent of mental health awareness, and claims to have struggled with his mental well-being during his years as a student and in the corporate world. He talked on mental health at The Asian Mental Health Collective, and was also part of the “World Is In Our Hands” campaign by the UN Environment Programme (UNEP) for climate change awareness. This campaign also featured notable actors Antonio Banderas, Joaquin Phoenix, Rosario Dawson, and many more.

The University of Guelph is grateful to Chase Tang for his benevolent and generous contributions, and wishes him all the best for his future endeavors. This scholarship endowment will greatly boost the university’s endowment fund, and help ease the financial burdens of more and more students. We encourage more of our alumni, and distinguished residents of the city of Guelph, to come forward and help us produce talented and successful graduates.

Watch the First Recipient of the Chase Tang Scholarship